It’s finally that time of the year when Shri Krishna paints our lives with myriad hues of ecstasy. YAAYY!! It’s Holi. So here are 9 reasons for you to play Holi in the very land of Krishna – Mathura Vrindavan. 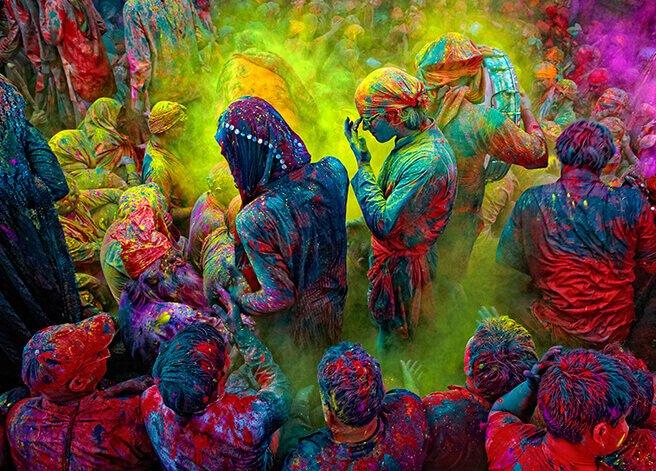 THE STORY:
So one day our little Krishna was upset about his dark skin & complained to his mother – “O re Maiya, why am I so dark and Radha so fair. Will she accept me with my shyam Rang?”

Hearing her little son, Yashoda Maiya came up with a plan. She advised Kanha to go and ask Radha to splash Him with any color she wants to see him in. This is how this beautiful festival of Holi began.

LATHMAR HOLI:
So Krishna went to Barsana to play Holi with Radha. But as natkhat as he was, he went on to tease our darling Radha. Angry with his advances Radha & her friends chased krishna with a ‘lathi’ & drove him out of Barsana.

This is how this festival got its name Lathmar. Every year men of Nandgoan is greeted by womem of Barsana with sticks to recreate the Radha krishna leela. And if a man fails to protect himself, he gets captured by the women. Radharani temple at Barsana is where this Holi is celebrated.

PHOOLON  KI  HOLI:
On Ekadashi prior to Holi, the Banke Bihari temple at Vrindavan celebrates this unique style of Holi where only flowers are used, to play with each other and hence the name Phoolon wali Holi.

A riot of colors took over the 400-year-old Gopinath temple at Mathura as hundreds of widows, clad in white sarees, smeared hues of red, yellow, and green on each other. This Holi was started from Pagla baba widow ashram.

We all know the story of Prahlad & how he was saved by Vishnu himself for his sheer devotion. This ritual of Holika dahan is to symbolically commemorate the same act of Victory of devotion over evil.

HURANGA:
A little away from Mathura is Dauji temple that comes alive by men not just getting beaten up but stripped of their upper garment by women. The tradition dates back to 500 years when this Dauji Krishna temple was established.

DHULANDI HOLI:
A colorful procession takes place through the streets of Mathura after the Holi festivities in Vrindavan get over. Starting from Vishram Ghat, the procession stops at Holi Gate. The various colours of the festival can be best enjoyed en-route, between the two landmarks. Vehicles decorated with flowers, with kids impersonating Radha-Krishna are the key attractions of the procession.

RANG PANCHAMI:
As the name says, Rang Panchami is celebrated after 5th day of holi. As the air gets purified with the fire of Holi Dahan, symbolising the purification from Rajas & Tamas guna, Rang Panchami invokes purity with the 5 elements of spirituality.

BANKE BIHARI HOI:
As the tradition of the temple goes, Lord Krishna dressed in white is brought closer to the devotees (an impersonation) and he showers them with Gulaal and colors. The priests follow suit and throw colors and flowers on everyone.

DWARKADHEESH
The Dwarkadheesh temple in Mathura is home to the biggest celebration on Holi after all this place is closest to our Kanha. We should be part of this festivity at least once in our life to feel the divine presence of Krishna.